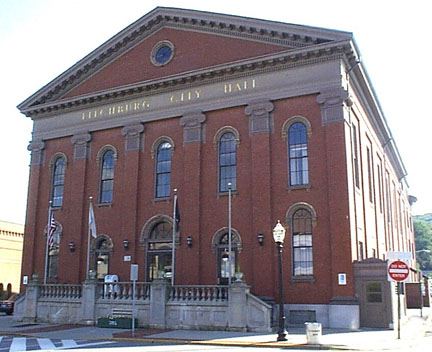 In 1852 town meeting voted to appoint a committee to investigate the construction of a new Town Hall to replace the long-inadequate 1792 structure at the Upper Common. After several years of wrangling over where to locate the building, the building committee agreed that the hall should be built just south of the Upper Common.

When all the bids came in higher than the allotted amount, one of the building committee members, Col. Ivers Phillips, resigned and agreed to build the building for that sum of money.
He assembled a local stone mason, carpenter, timber framer, brick-maker and a team of laborers to build the Town Hall, completing the task in time for the dedication ceremony on January 7, 1853.


The two story Italianate design featured brick walls on a granite foundation with brick pilasters and granite lintels, and a gently sloped slate roof. The design featured offices on the first floor and a large auditorium meeting room with balconies on the second floor. By the late 1870s the prosperous community had outgrown the space, and noted local architect Henry M. Francis was commissioned to design an addition. Four stories were added to the rear of the building in 1879.

In 1964, in response to a state mandate that cities and towns take over the welfare system, city officials decided to partition the auditorium area in the second floor into offices. Other twentieth century interior alterations have replaced virtually all original materials in the building. The exterior appearance has also been altered over the years. Many of the large, double hung sash windows were replaced with modern casement style fixed windows during the 1964 renovations. At some point in the 1960s a concrete porch with side stairs replaced the stairway that led to the front of the building. Additionally, ionic capitals replaced the composite capitals on the front pilasters giving the building its current Greek Revival appearance. Minor interior renovations were completed in 1985, constituting the last significant work done to the building.

The building sits at the foot of the Upper Common on Main Street, directly across from the old Fitchburg Theater and adjacent to Renaissance Park. Many of the historic buildings that formerly surrounded the building have been demolished for other commercial uses, parking or park use, but Fitchburg City Hall continues to serve the people of Fitchburg in the 21st century.